Excited to be a part of the fall exhibition for I Like Your Work Podcast curated by Hilary Doyle at Piano Craft Gallery on Tremont Street in Boston. Launch Party Spetember 3rd from 6-9pm.

“Forbidden Fruit” plays with the mythological Garden of Eden as a place of questioning and metaphor. This group show of work explores motherhood, craft, and nature in over 30 works of art from around the country and world.

Eve is the metaphorical stand in for all women and all mothers and also a representation that is questioned in this show. “Roles that traditionally fall on women such as that of parent, nurse, teacher, educator etc do not need to be a means of oppressing women. On the contrary, as long as these roles are valued as important societal achievements the women who perform these roles are esteemed in their community.”- Societies of Peace Matriarchies, Past, Present and Future (1). Images of the figure and especially the female form in the show either reveal insights into motherhood or utilize abstraction of the body in ways that subvert the male gaze. Fragmentation of the body merging with space can be seen in the layered enigmatic paintings: such as in Man in the Jungle by Denise Reichenbach and also in shape shifting bodies of “Divers II” by Aparna Sarkar. Motherhood is examined as fraught and emotionally complex in the symbolic works in the show. “Ameryca’s Two Sons” by DaNice D Marshall. shows two son’s: one dressed as an american flag leaps from the table while a second more behaved child draws serenely. “Rear View Mirror” by Kara Patrowicz represents a mothers watchful eye -we see what she sees: her baby, the road and more abstractly nature passing by all at once.  Christl Stringer and Ariel Freiberg show the ways women push themselves to extremes from metaphorical balancing acts to impossible feets of multitasking. Amy Reidel’s ceramic mombies show the pain and humor of being a mother or grandmother as children are permanently glued to their sleepless bodies. Other figures enter political forests as in Annika Sarin’s unbelonging 1 which shows women's pain while critiquing the “unbelonging” history of colonization.

Craft is another once taboo theme that is a celebrated motif in the show. The Pattern and Decoration movement artists in the 1970’s debunked and called out the pejorative use of the words “decorative” or “craft” as mere sexism masquerading as art theory, yet many of these ideas still pervade today (2). Powerful intricately embroidered collage work by Venetia Dale hides the phrase “mother said no” in a cacophony of references to pop culture and floral forms. Jacquelyn Strycker’s printed psychedelic “Crazy Quilt” seems to propose new shape possibilities for blankets giving the pattern an almost anthropomorphic form.  Ceramic sculpture “Conglomerate V” by Lauren Skelly Bailey shows a conceptual amalgamation of mosses, leaves, a mountain or an underwater coral reef that is dying and coming back to life all at once.

Wilderness in the show is depicted as lucious, exploding open with light, and endless mystery. Nature seems primordial in the detailed, paper work “When Darkness is At Its Darkest, That Is the Beginning of All Light” by Alexandra Chiou, or in the astral kiss in the stars by Berly Brown. Light is broken down into a warm color spectrum in Rebecca Robert’s painting “The First Half of June.” In Su A Chae’s cubist jungle titled “Journey” wild creatures dart about just out of view. Depictions of fruit in the show are playful and probing with references to movement and the body. Rachel Morrissey’s “Blue Blume” has a snake or vine that, glowing neon, creeps towards the viewer in the dead of night. “What The Garden Gave Me” by Julia Curran pokes fun at the cycles of birth, aging, and death behind a magical set of doors springing open or closed depending on how you choose to view the work.

In summary the whimsical, wild work in “Forbidden Fruit” creates a lush environment to enter into as the viewer is asked to probe and question the meaning and value of craft, motherhood, creation myths and nature today.
​
​
​
Hillary Doyle
​ 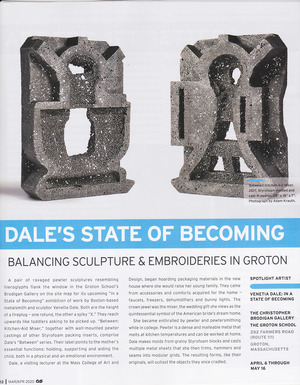 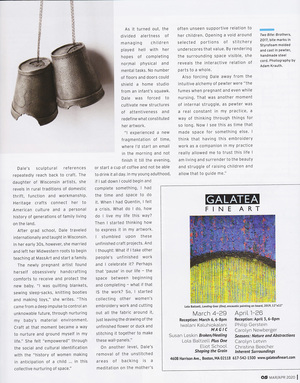 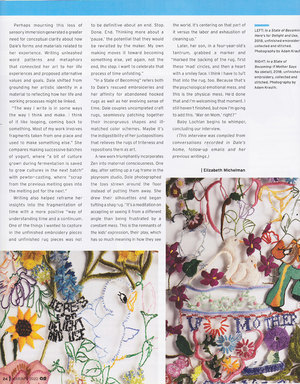 ArtCritic Elizabeth Michaelson wrote in March/April Artscope Magazine on my art practice and exhibition that was to be installed at the Groton School. Cancelled due to covid-19. 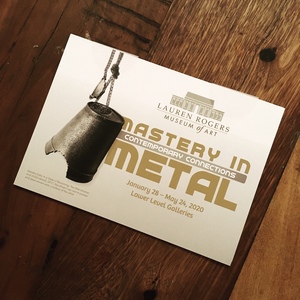 Artists are breathing new life into techniques and forms found in centuries-old media, and they are incorporating contemporary attitudes and approaches in their work.  The Contemporary Connections series uses the strengths of our collection to make connections to contemporary art.  In honor of our fine collection of Georgian silver and the handwrought iron by Samuel Yellin featured throughout our building, we present this exhibition of works by contemporary metalsmiths that shows a variety of metals and approaches. Elizabeth Brim forges feminine and domestic objects such as high-heeled shoes and pillows out of steel.  Venetia Dale’s installations of styrofoam cups, key chains and plastic baskets, all cast in pewter, observe and question the common objects that aid us in the comfort of our daily lives.  Blacksmith Ernie Dorrill celebrates Gothic and Renaissance motifs in his candelabra, lamps, locks, and keys. Silversmith Chloe Darke is known for her traditional domestic flatware, as well as expressive contemporary vessels and jewelry.  Andrew Hayes combines steel with pages removed from books to create unique sculptures with their own strength and stories.  The work of Myra Mimlitsch-Gray deconstructs precious silver services and humble cast iron cookware and asks viewers to imagine the domestic lives of women in earlier American households.
Reliant Objects II

Reliant Objects is a group exhibition of interdisciplinary craft work challenging notions of form, function, and the future of domestic objects. In Reliant Objects, the works attempt to claim their own narrative space, building new futures and object-agency through challenges to form, misuse, and dysfunction. These objects rely upon a viewer’s recognition of their sameness and difference, in the ability to seek meaning in their digressions from everyday familiarity. This exhibition is not about strictly historical objects or everyday objects, material specificity or labored craft. It is not about the history of ‘the thing’, but rather about the ability for these objects to look into the future and serve as a reflection of self. In their multiplicity, augmentation, or fragmentation, these works act as a mirror, allowing the viewer to recognize themselves and their collective future potentials in disparate and unfamiliar parts and pieces.